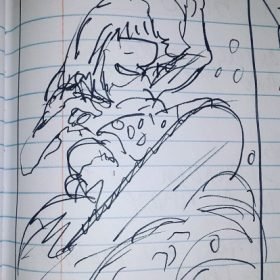 Good Night Aleister Crowe by Ken Eppstein and Darren Merinuk: A veteran glam rocker has words with a young horror-rock star, but they eventually come to terms… In a cutting edge sort of way!

What the Chuck? by Dustin Goebel: A nightmarish visit to a pop-punk show has a teenager questioning how healthy it is to hang out with his buddy Chuck.

Coffee Break by Patrick Roach: A lonely waitress lets a creepy customer get under her skin.

The Vicar: Where The Hell Is Bill by Ken Eppstein and Michael Neno: One of the Vicar’s Choir goes missing while his band mates share stories about meeting their mysterious band leader.

Zombies by Ken Eppstein and Ryan Brinkerhoff: It’s the end of the world and the last man alive has to decide how he wants to go out!-